Growing old in a garden 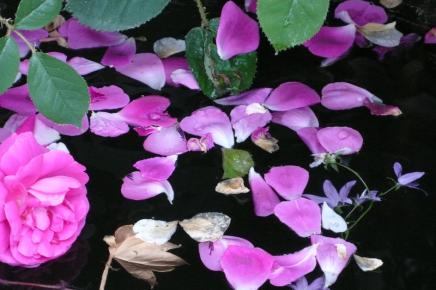 First, when we arrived here, we pulled out a tall beech hedge that obscured the entire view and planted some shrub roses instead, old, rare varieties, and here and there still young yuccas and irises that we had brought from a wild garden in the Provence, as well as a fig cutting. This one – twenty-five years have since passed – has turned into a large tree bearing more fruit than we can eat. The yuccas grew head-high multiplying and ousting their neighbors, their white bells flowering in magnificent panicles. They bloom whenever they like ignoring our climate and sometimes they even try it in winter.

In the habitat dug out where the old concrete patio used to be, water lilies, pond weed, yellow irises and many other plants have propagated covering nearly all of the water’s surface with their leaves.

Of the original garden a few fruit trees and a huge birch remain. Two bamboo plants, the present of a friend, are sprouting around its old trunk and high through its branches and they have created a forest over the years. Close to a larch that we planted on the sixtieth birthday of my husband a cherry pit turned into a tree and the elder beside it complements the small green leaves of the birch to a dense shade. 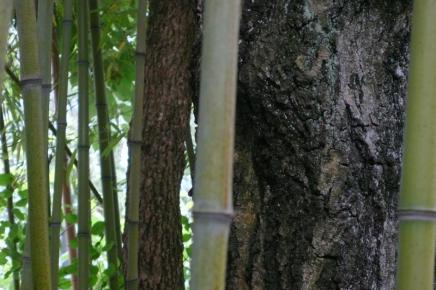 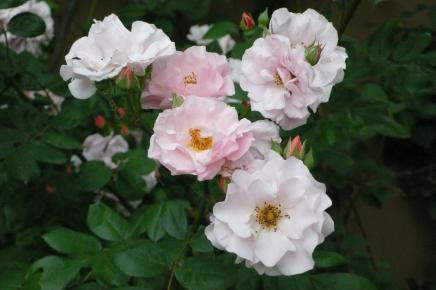 It is remarkable how they all get along, bamboo, larch, elder, cherry and birch so close to each other, and that the meagre vineyard soil succeeds in nourishing the different intermingling intertwining roots of the by now enormously grown trees in the nearly equally tall bamboo forest.

In the shade of the trees there is a table with a bench and a few chairs. When the weather is fine you can eat here. You can also rest in a deckchair under the old birch. Like the trees we all of a sudden grew older and like to rest in the shade contemplating the various rambler roses covering the earth coloured house walls, the sunflowers, dahlias or a Madonna lily whose bulb developed many stems over the years just in flower now in front of the tall panicles of the poppy. This one over time migrated from the place I planted it – where fuchsias in their pots now flower all summer – slowly meter by meter in front of the parlor window. Thus, when you look out of the window through the mauve colored blooms, you will see everything, the vineyard seceding at the rear of the garden, the cars down on the road, the poplars at the lake and the sailboats on it through some kind of a curtain, even Vinelz on the other shore and Erlach Castle. 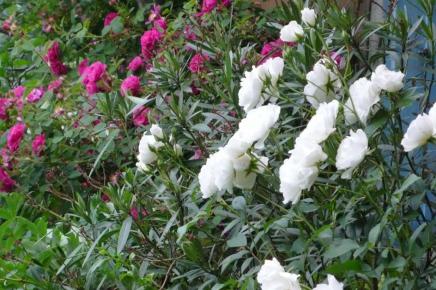 Over the years the stronger plants, Japanese anemones, evening primroses, perennial forget-me-nots and weeds outgrew many things. Tall mallows have settled in front of low ones, a lovingly created garden has turned into a wild one that grows and grows; and although I failed to catch up with weeding and pruning a long time ago, it flowers beautifully year after year contrary and above all expectation.

Born in 1930 in Czechoslovakia where she grew up, came to Switzerland after the war in a Red Cross train. School for Design in Zurich, 1950-52 in New York.

Married Gian Pedretti in 1952, 5 children, writes and works as sculptor in La Neuveville, BE.