It must be magic this flurry of frilly yellow flowers appearing at the most unlikely time, in early January, when even snow drops are reluctant to show their white tips; and every year I’m sure the apparition is going to disappear at the wink of a wand when I look away for a moment. But the bloom of the aptly named Witch Hazel is quite real and lasts through stormy winds and icy nights well into February, and when the yellow petals finally wilt they leave behind equally intricate tiny sockets of deep purple. Through the summer months fruits will grow from these, two glossy black seeds in a capsule that will burst open in autumn and eject them with such force that they will fly up to 10 metres, justifying the shrub’s nickname Snapping Hazel. 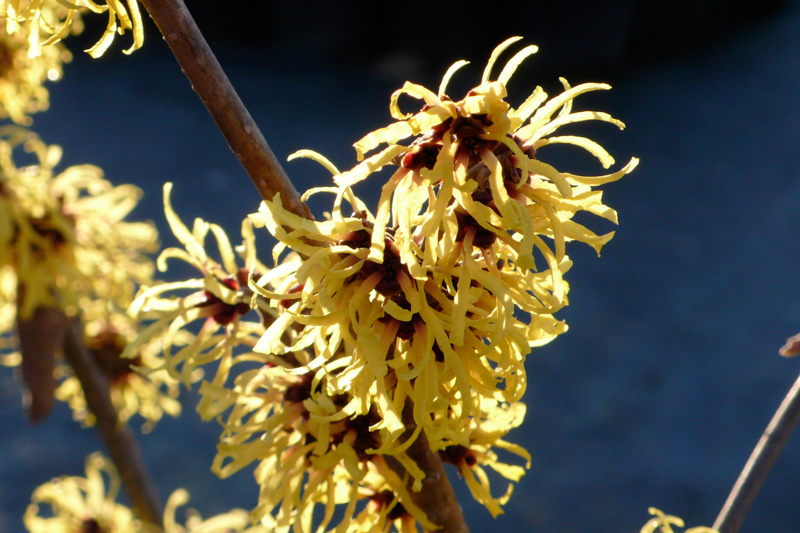 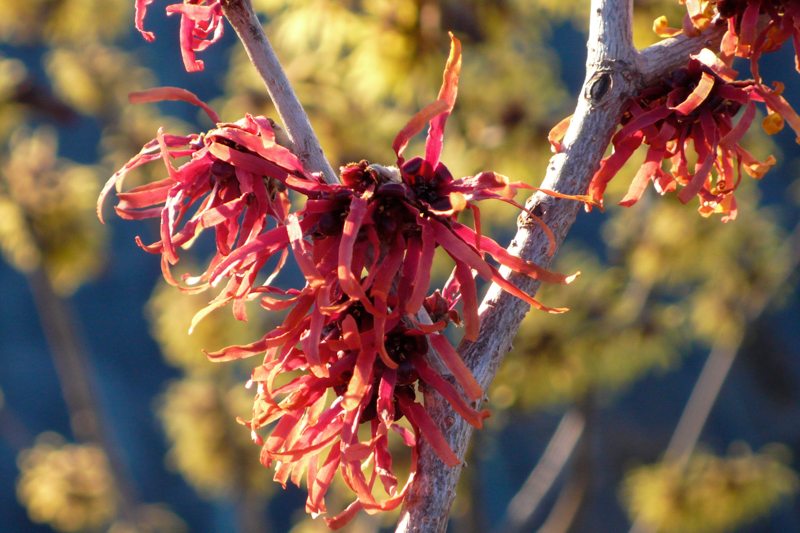 Although the witches are clearly at work in this plant, it gets its name from the Old English word wice meaning supple, pliant or bendable, also to be found in wicker and weak. Wych hazel was first used as a synonym for the common Wych Elm (Scots Elm), perhaps based on the similar appearance of hazel and wych elm shoots, and then used by American colonists when they discovered the Hamamelis (meaning "together with fruit", referring to the simultaneous occurrence of flowers with the maturing fruit from the previous year) in the New World. Two of the four species originate in North America, one is from Japan the other from China.

As a matter of fact Witch Hazel is not really related to the true hazel (Corylus) except for a few superficial similarities, which may lead to the belief that they are. But like the branches of hazel in Europe, adequately shaped twigs of Witch Hazel are used in America as divining rods to find water. However, I could find no evidence that American Quidditch teams use Witch Hazel for their broomsticks.

Plenty of evidence can be found for the astringent qualities of the bark and leaves of Witch Hazel. Once used by Native Americans they are today components of a long list of healthcare products covering a range of ailments from inspect bites and ingrown nails to eczema and haemorrhoids.

By the time the bloom of the Witch Hazel has faded, its leaves are budding and the elegant frame of the shrub disappears under lush green but somewhat unspectacular foliage.  In autumn the shrub returns to its old tricks: the leaves turn into bright yellow and orange and when they fall they cover the ground like a carpet until swept away by wind or a rake. Then, for a month or two, I forget about the witchcraft in my garden – when it reappears, it is as seeing the magic for the first time.